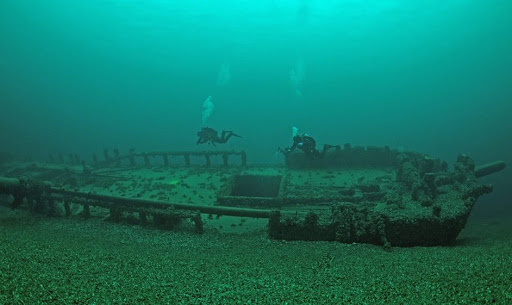 Lake Erie is said to have gotten its name from the Iroquois who called it “Erie” (“cat”) because of its unpredictable and sometime violently dangerous nature. The shallowest of the Great Lakes it has a maximum depth of 210 feet and unlike the other lakes, every square foot of its bottom is accessible to sport divers. Lake Erie’s stormy reputation due to its shallow depths and Seiches—harmonic oscillations of the lakes— caused by such atmospheric disturbances as winds or differences in barometric pressure. They have resulted in water piling up temporarily on one side, or end, causing different water levels between Buffalo, N.Y., and Toledo, Ohio, as high as 13 feet or more and waves reaching dangerous proportions in a very short time.

For centuries, Lake Erie has been a bustling thoroughfare and it has a long historical role in the settlement and economic development of North America. The Erie canal opened the Midwest to settlement in 1825 and the Welland Canal to shipping from around the world in 1829. Today, though it is the smallest Great Lake when it comes to volume it is surrounded by the most industry. Seventeen metropolitan areas, each with populations of more than 50,000, border the Lake Erie basin. The marine traffic that created and supported this development was subject to weather-related sinkings, collisions and other calamities that claimed many vessels, leaving the lake floor littered with their remains. It is estimated that of the 8000 Great Lakes shipwrecks, approximately 2,000 located in Lake Erie with about 270 are "confirmed shipwreck locations." Most wrecks are undiscovered but believed to be well preserved and in good condition and at most only 200 feet making them accessible to diving. Most of the wrecks have yet to be discovered, drawing divers from all over the world in hopes of being the first to uncover a lost piece of history.

The goals of Lake Erie Diver training are:

Two dives will be required each at a location in the eastern and western region of the lake (minimum of 4 total) on identified shipwrecks while demonstrating a basic knowledge of the resulting circumstances to its passengers and crew.

The student diver must demonstrate accurate and adequate knowledge during knowledge reviews and in support for the selected wreck dived. The open water dives and must performed in compliance with the procedures dictated by the dive boat operators and PADI diving best practices.

By the end of knowledge development, student divers will be able to explain:

By the end of the Confined Water Dive, the diver should be able to, as part of a buddy team and instructor guidance as appropriate:

a) Involve student divers in dive-planning activities. Give special attention to the divers anxiety and stress levels, in addition to student diver euipment preparedness.

b)    Conduct a thorough briefing. The better the briefing, the more smoothly the dive
will proceed. Assign buddy teams according to ability (weak with strong) and establish a
check-in/check-out procedure.

d)    Remind divers to familiarize themselves with their buddy’s equipment.